Once more, music festivals around Europe are readying their band line-up in time for the early birds. Those early birds are now dreaming of live music, friends and sun, and checking which bands they would like to see this year. Ilosaarirock has already announced couple of big foreigner names: Ellie Goulding, Paradise Lost, and the Danish band Volbeat. On the other side of the Nordic countries, Roskilde Festival has recently announced Macklemore & Ryan Lewis, The Last Shadow Puppets, and At the Drive-In. They will be sharing the line-up with the Finnish band Have You Ever Seen the Jane Fonda Aerobic VHS?
As we have said before, Ilosaarirock and Roskilde Festival share lots of ideals, the most important ones being the good vibes in them and that they are Not-For-Profit. Also, they have aimed to be the greenest festival around. Ilosaarirock has even got the highest possible award in that regard: “A Greener Festival Award”. 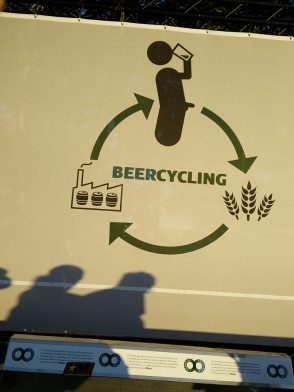 Last year, a team from Uljas went to Roskilde Festival to find out how hard they tried to keep things green at the festival grounds in Roskilde.
During the festival, the grounds are home to 130,000 dwellers, making it the 4th biggest city in Denmark by population. Such a city has an enormous environmental footprint. To start with, all those people need to reach Roskilde, making the CO2 generated by transport one of the biggest issues. Eighty per cent of the festivalgoers are from Denmark and they are encouraged, if not forced, to take public transport. To sweeten the deal Roskilde Festival has its own train station that only opens during the festival!
To lessen the production of CO2 during the festival they built their own wind turbine to supply green power to the festival long time ago, and source the rest of the needed electricity from renewable sources.

For the last couple of years a great emphasis has been put into not wasting food. Most of the garbage at a festival comes from the meals that music lovers require to keep partying. And they are in for a treat in Rosklilde, a great selection of restaurants, which you can navigate with the Roskilde restaurant app, helps satisfy any Finn dietary requirement. With app, or without app, the eating plans of 130,000 people are hard to predict and the leftover food has to be taken care of. At Roskilde they have partnered with the restaurants inside and outside Roskilde to put that extra food to good use. Regularly, a group volunteers from the more than 30,000 that work in the festival pick up the food before it expires from the food venues. The food ends up in a professional kitchen with professional cooks. There, cooks then use all the ingredients retrieved to make meals, which are delivered to homeless centers and, in some cases, frozen so they can give them away later.

However, the funniest example for the renewable economy is the concept of “Beercycling”, which was launched last year. Roskilde Festival has made an agreement with local farmers to convert beer into beer. They just need some easy support from the festivalgoers, who need to drink the beer first, and then use the special urinal to collect the golden liquid. The liquid ends up in special tanks that will be sent to the farmers, who will use it as fertilizers to grow hops and barley. And guess where those grains end? Next year’s festival beer.
We hope to be there this year to report on how it tastes!