Last month the Joensuu campus opened its doors to the celebration of spoken ideas. World Speech Day is a global event that aims to celebrate speeches across the globe and give people from different backgrounds an outlet to spread their thoughts. Every year on March 15th, unheard voices are given a platform to speak up and inspire others by doing so.

At UEF, the event was held in conjunction with the Joensuu Debate Society. Anton Moisseev, board member of the society, inaugurated the evening and stated:
“Debating is a great way to practice public speaking and develop different skills.”
Moisseev then invited speakers to initiate what turned into a collage of ideas that delved into the theme of the event: “How to Make the World a Better Place”.

Ten speeches comprised the evening. From Tanzania to Nigeria, Vietnam, and Finland, speakers from all over the world shared their insight on a variety of topics. Speakers did not only represent different geographical areas, but also a variety of professions. Attendees were joined by university students, an economist, a lawyer, a member of the Joensuu Peace Group and a wilderness guide, among others. 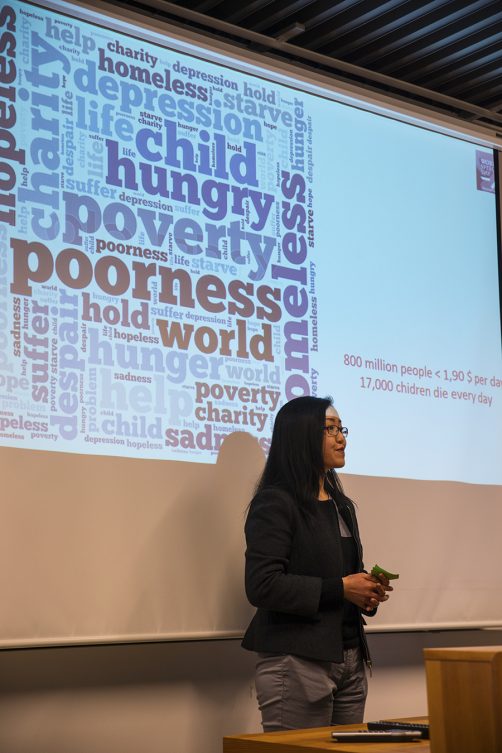 As one speech ended and a new one began, the room turned into an exchange of ideas ranging from the power of the media to neurodiversity, economics, democracy, poverty, and the idea of a global language. One speaker was Theresa Thu Hoang, a Vietnamese who has been living in Finland for five years and is the ambassador of World Speech Day in Finland.

“Speeches empower unexpected voice and to make a great speech, one must connect with the audience,” Hoang said.

Because people are constantly surrounded by political speeches and advertising campaigns, I asked her what makes a good speech, what do those speeches that stay in our minds for days have in common?

“A good speech is about the message of the speech, how it brings value to the event’s theme and to the audience,” she replied. So how did this translate to the speeches taking place in that lecture room?

All speakers posed unique, sometimes controversial ideas that were presented in different styles. Manon Bonal, a student at the Joensuu campus, shared her own story about letter writing.
“When I realized I wasn’t getting letters because I hadn’t sent any, I realized we must create the type of world we want to live in,” and thus, Bonal starting sending letters to others.

Huck Middeke, a wilderness guide, father and husband, confessed that he owns way more spoons than needed. He opened his speech by asking a simple question.
“How many of you would never consider suicide as an option?”

He suggested looking at our possessions and stop becoming the suicidal shoppers that are always looking for more than we can produce.

Making the world a better place does not only involve nature, but as Oyemakinija Tayelolu proposed, it also involves relying on each other.
“Let’s begin by looking at the world better, no one can be the best at everything,” the speaker from Nigeria stated. He proposed that we need to create relationships based on equality and love, not on racism.

After the last speaker, Tuomo Timonen, highlighted the importance of voting, the event concluded and left audience members like myself inspired and willing to share our own perspectives. Like the subject matter of the event, all topics can be viewed from a thousand angles comprising one huge puzzle, where every speaker in the world, is just a small – but essential – piece of the puzzle.